Showrunner Meg Messmer has always used sheer grit and determination to get ahead in her career. And that’s been no different with her latest digital series, Intersection. The series, which was crowdfunded and community supported, does a deep dive into how race, class, gender identity, and ageism intersect under the social issue of gentrification in one of the most historically turbulent cities in America, Atlanta.

Why Atlanta? The city is both the birthplace of the Civil Rights Movement and the modern day KKK. It also leads the US for cities with the top income inequality. “The tension here is palpable,” says Messmer.  That’s what attracted her to the idea of a TV show in Atlanta as opposed to the countless other cities in the nation facing gentrification.

Messmer has been a gentrifier her “entire adult life,” living in cities like Detroit, Harlem, Brooklyn and Los Angeles, and when she finally became aware of her part as a gentrifier, she wanted to use her skills as a filmmaker to bring that knowledge to more people. “But I knew it couldn’t just be from my perspective,” she said. “We’re living in the age of authenticity and it’s my responsibility to allow other voices to speak for themselves. I think audiences as well as the whole world craves that truth right now.”

Messmer has been a gentrifier

So she built a diverse, all-female writer’s room with the talented writer-actors Muretta Moss, Karen Ceesay, Jacinte Blankenship and Jennica Hill. “The dynamic of the writer’s room was very critical. Any time there was controversy between the five of us, I knew that’s what we had to put on screen.”

Shot with 4 diverse Directors, an Oscar winning Director of Photography, and a cast and crew that was over 80% female and BIPOC, Messmer did what she set out to do and created an environment where authentic voices were honored. 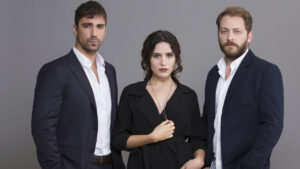 What’s next? The six episode, short-form series premiered on YouTube and quickly gained momentum. The series is currently under contract negotiations with Atlanta’s PBS station, WABE TV.  “The issues aren’t just black and white, or right and wrong. There are so many shades of grey. Our whole goal was to start conversations between communities about hard topics that people are avoiding. Gentrification is the result of years and years of systemic racism, and we need to understand how we, as individuals, fit into the puzzle or we will continue to perpetuate the problems. I don’t have the answers. That’s for people who are smarter than me in their respective fields. But I’ve never been afraid to ask questions or look in the mirror that might be pointing right back at me. I thank my mom for raising me that way.”

To watch the series – www.intersectiontheseries.com

For Your Consideration – Short Form Emmy